The Fierce battle for Wisdom

01 Jul The Fierce battle for Wisdom

I recently had an open vision where I was witness to a boxing match. Both opponents were already in the ring and already engaged in heavy duty combat. I could hear the announcer of the bout saying, “They are throwing some real haymakers at each other.” Both men in the ring had the word “wisdom” sewn on their boxing trunks. The vision ended with no clear winner.

When I asked the Lord about what it was that I had just seen, He pointed me to James 1:5 and said, “Start there.”

James 1:5 says: “If any of you lacks wisdom, let him ask God, who gives generously to all without reproach, and it will be given him.” 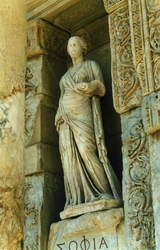 I said, “OK, Lord, I can ask for wisdom, but in the vision there were two wisdoms, and they certainly didn’t like each other.” I felt the need to look up the Greek word for wisdom, and found that it is “sophia.” It means “wisdom, insight, skill (human or divine), intelligence.”

I still was not quite understanding what I saw in the vision, so I just paused and waited on Him. In the waiting, He showed me a statue of a female with the name “Sophia” etched into the platform that she was standing on. As I researched it some, I found a photo of the statue that I saw. It was taken at an archaeological site in Ephesus (Turkey). It turns out, this statue of Sophia (wisdom) is from Gnosticism. They believed that she was comparable to the soul and also an emanation of Monad. Monad was one of the names for the “supreme being” of Gnosticism. Gnostics also believed that Sophia was the bride of Christ. (Photo via Wikimedia Commons)

As I learned all of this information pertaining to what the Lord had shown me, I asked what it all meant. He said, “There is a fierce battle in the spirit pertaining to the dispensing of wisdom on the earth for what to do and how to proceed in many things. One wisdom is Kingdom wisdom rooted and grounded in the knowledge of God. The other is a false, gnostic, distorted wisdom that is looking to lead people into confusion and wrong decision making.” Then, regarding my vision about the two fighters, He said, “The haymakers that they were throwing at each other is important.”

Haymaker: “A punch in which the arm is whipped sideways from the shoulder joint with minimal elbow bend. The name is derived from the motion, which mimics the action of manually cutting hay by swinging a scythe.”

He then highlighted to me a scythe. A scythe is similar to a sickle, but has a longer, straighter blade and a longer handle. I then heard the Lord say, “When the fields are white with harvest you throw in your sickle to reap the harvest, but the grim reaper only reaps a harvest of death.” Sure enough, the tool that the Grim Reaper carries in all of its depictions is a scythe.

The Sickle vs. the Scythe: A Battle for Wisdom That Leads to Harvest

As I heard all of this I went back into the vision of the boxing match, but now I was able to identify which fighter was which. Godly wisdom was in gold trunks with the word “wisdom” in red. Gnostic (or demonic) wisdom was in all black—even the word “wisdom” was in black. There was also now an audience in the building, but instead of sitting and watching the bout, they were all on their knees. Then the Lord said, “It is the praying remnant; they are doing what they are supposed to, but some are weary.”

I then saw the corner crew of godly wisdom come and begin to work on those in the stands that were growing weak in their intercession. They were given fresh water, their wounds were cared for and words of life were spoken over them. As they were revived by the corner crew, the tone and momentum of the bout shifted in the favor of godly wisdom.

Then the Lord said, “Tell them that what they are doing is causing the sickle to swing and not the scythe. Their intercession has turned the momentum of the bout and the sickle is beginning to swing and the white harvest will finally be brought into the storehouse of the Lord.”

Sorry, the comment form is closed at this time.